Pushing the Boundaries of Cryo-Electron Microscopy

We’ve all left a water bottle in the freezer overnight only to find it bulging the next morning. That’s what water does when it freezes. It expands, right?

Did you know, it is possible to freeze water without it expanding?

The ice that results from these two freezing methods is referred to as vitreous, meaning glass-like.

Recent technological advances in cryo-EM have led to unprecedented resolution of unfixed and unstained macromolecules and macromolecular complexes, providing insight into the details of cellular and molecular structure that have never before been possible. For example, amino acid side chains, important among other reasons for the role they play in complex molecular functions, can now be visualized.

The next hurdle is making cryo-EM work with thicker specimens. Because the optimum thickness of a sample is only 100 - 200 nm, it is not possible to image macromolecules in their native cellular environment. In fact, only the margins of cultured cells can be examined because the intact cell is just too thick.

In the 1940s Wadsworth Center was the first public health laboratory with an electron microscope, and since then it has continuously upgraded its capabilities. Much of the equipment is one-of-a-kind, some of it custom-designed and/or modified by the 3D-EM Facility Manager Mike Marko. For example, one instrument is currently being modified to run unattended, gathering data over nights and weekends.

Since its inception, Wadsworth’s electron microscopy group has produced many “firsts” and published hundreds of images featured in leading journals, textbooks and encyclopedias. For example, Wadsworth investigators were the first to:

Here are some of the on-going projects: 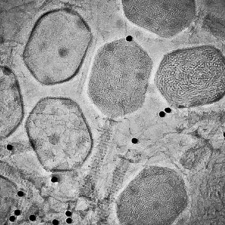