Rabies in New York State was initially a disease carried by domestic dogs, a problem brought to all of North America by European settlers in the 1700s. With the advent of record keeping in the 1930s, reported cases of animal rabies fluctuated between 20 and 600 annually. Most cases were recorded in domestic dogs although there was also some spillover to livestock. From 1925 until 1944 there were 10 human rabies fatalities, all linked to domestic dog contact.

Postwar compulsory canine vaccination programs in New York controlled the rabies cycle in domestic dogs by the early 1950s, but rabies in foxes spread concomitantly into the state from the south. Wildlife rabies has cycled in terrestrial carnivores in some areas of the state since the 1950s, mainly in red foxes, skunks and raccoons. The most persistent problems until 1990 were periodic rabies incursions into red fox populations in northern New York counties. The disease found its way to northern New York from the Provinces of Ontario and Quebec, Canada, where rabies was enzootic. 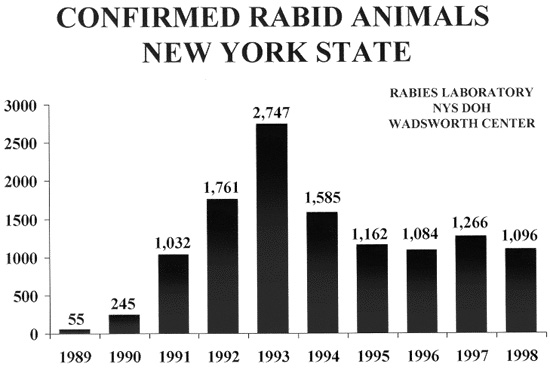 Rabies virus infection in bats was first recognized in the US in 1953, and the first rabid bat was identified in New York State in 1956. Since then, the disease has been identified in each of New York's nine species of insectivorous bats and is widely distributed geographically within the state.  Bats and rabid bats can be found in every corner of New York State, from Manhattan to the most remote area of the Adirondacks.

Among bats encountered by people and pets that are submitted to the rabies laboratory for testing, about 3% are found to be rabid. Among normally behaving bats collected in their natural habitats, a fraction of 1% are rabid. Outbreaks of rabies in bat populations have not been observed, and finding one rabid bat in a colony of bats is not evidence of greater prevalence of rabies in that population.

Rabies infection in bats is similar to the disease in other mammals. It is characterized by a variable incubation period that can be months long, a clinical period of about a week with behavioral changes and progressive paralysis leading to death, and the capacity to transmit the virus by bites inflicted during the clinical period.

Well documented instances of transmission of rabies from bats to terrestrial mammals have occurred in the state, particularly to domestic cats, grey foxes and horses.

There have also been two human rabies deaths attributable to bat rabies in New York State: in 1993 in an 11-year-old Sullivan County resident, and in 1995 in a 13-year-old resident of a nearby Connecticut community that was being treated in a Westchester County hospital.

Since 1990, 20 of 22 domestically acquired human rabies infections in the United States have resulted from infection with bat rabies variants, and in only one of these cases was there a clearly documented bat bite. In many of the other cases there had been a bat encounter where direct contact was probable, but no bite was detected.

Because of these observations, and because bat bites may result in limited injury, rabies post-exposure treatment may be provided following encounters with bats where there is a probability a bite may have occurred and gone undetected, unless the bat can be captured and tests negative for evidence of rabies infection. These changing practices have resulted in an increase in the number of bats received for testing at the Wadsworth Rabies Laboratory.

An intense and widespread rabies outbreak presently affects raccoon populations across the US eastern seaboard, from Maine to Florida. The raccoon rabies outbreak reached New York from the south in 1990, and has continued to spread so that now nearly the entire state is affected.

This wildlife rabies problem first emerged in Florida in the early 1950's, and spread to its current distribution at a steady rate of 10-20 miles per year, augmented by a few "jumps" of greater distances resulting from the long-distance movement of infected raccoons by human activities.

The great majority of cases in New York have occurred in raccoons, but the disease also has been transmitted by infected raccoons to a wide variety of other wild mammals and unvaccinated domestic animals.

The number of laboratory-confirmed rabid animals in the state increased dramatically as the outbreak spread across the state, reaching 2,747 in 1993, the greatest single-state annual total in the history of the United States.

When raccoon rabies invades an area, there are increasing numbers of cases for a 1 -2 year period, followed by diminished numbers of rabid animals as the raccoon population wanes due to the rabies-related mortality. Periodic flare-ups occur as raccoon populations rebound locally (approximately 5 year cycles).

The greatest outbreak-related increase in expenditures has been a consequence of a tremendous increase in the number of human rabies exposures requiring rabies post-exposure vaccinations. At approximately $1,000.00 per person treated, the increase from the pre-outbreak average of 100 per year to greater than 2,500 treatments per year is costing New Yorkers more than $2 million annually.

New York State has been a leader in the conduct of field trials to develop novel methods of wildlife rabies control, such as the distribution of vaccine-laden baits to immunize raccoon populations to interrupt and extinguish the rabies outbreak.