Back to Senior Staff

DNA replication is a fundamentally important process in all cells. Mistakes during replication cause mutations as well as large scale genome rearrangements, which can ultimately cause antibiotic resistance in bacteria as well as aging, cancer and resistance to chemotherapy in humans. Over the past decade, the number of known polymerases responsible for genome duplication has expanded dramatically, yet our understanding of how all these enzymes contribute to genome stability is far from complete.

Of particular interest is how the replicative polymerases, which are responsible for the majority of genome duplication, are replaced by the more specialized polymerases that are responsible for translesion synthesis across from damaged DNA bases. While the translesion polymerases help cells tolerate DNA damage, they have a 10- to 1000-fold higher error rate than replicative polymerases and can substantially increase the frequency of mutations. The situation is made even more complex since most cells have multiple translesion polymerases, each with their own lesionbypass and mutational specificities. Genome stability is thus critically dependent on which polymerase carries out DNA synthesis.

In the past few years, we have focussed on the "DinB" branch of the Y-family translesion DNA polymerase phylogeny. We have demonstrated that the archaeal DinB polymerases (Dbh and Dpo4) and the human DinB polymerase (pol kappa) all use a conserved "template-slippage" mechanism when creating single-base deletion mutations in repetitive DNA sequences, and we have determined structures showing how Dbh and Dpo4 bind to DNA with the bulged base that arises in the template strand during this process. More recently, we have discovered that, after template slippage, Dpo4 and pol kappa (but not Dbh) have a strong propensity for realigning the slipped DNA structure before continuing DNA synthesis. Remarkably, by exchanging the inter-domain linkers of Dbh and Dpo4, we have found that polymerase conformation is a major determinant of nucleotide incorporation fidelity and translesion specificity.

We are now turning our research efforts to the replicative and translesion polymerases of Staphylococcus aureus, one of the gram-positive bacteria responsible for ~65% of the millions of healthcare-associated infections that occur every year in the United States. 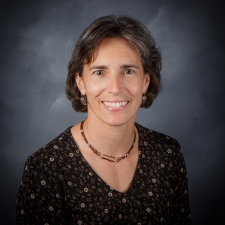